The Maine, Vermont, and New Hampshire Lotteries, known as the Tri-State Bloc, work together on various games. Every year or so, the consortium meets so instant vendors can pitch different license packages.

“After hearing all the pitches, the lotteries go back and individually review each license game offer and pick our favorites. Then we (as Tri-State) all get back together, and the very same one or two games would bubble up at the top of each of our lists,” Maura McCann, Director of Marketing, New Hampshire Lottery, said. “This time, Big Country Cash was right at the top.”

“I think these three states have a very similar rural lifestyle and culture, which really brings us together with these games,” Skip Whitman, Marketing Manager, Vermont Lottery, said.

Big Country Cash is an Alchemy3 game. Its unique element is its second chance prize, which guarantees winners to go on tour with a famous musician. For the Tri-State iteration of the game, the musician is Lee Brice, a country star with 5.8 million monthly listeners on Spotify. The winners follow Lee Brice for five days on the road, going from show to show. They get VIP treatment at all the events and their own tour bus. 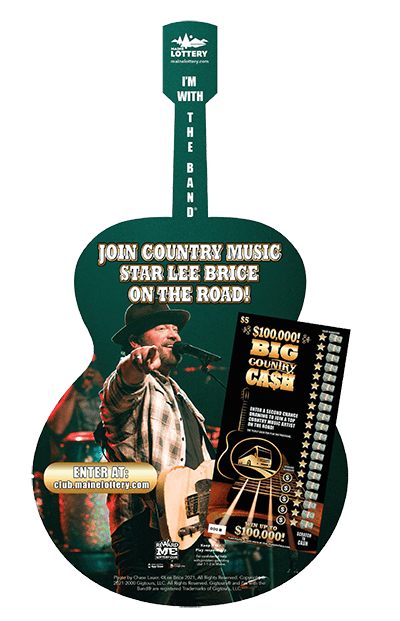 “This game stood out as something we’ve never done before, and that would appeal to our overall player base. It’s just such a unique opportunity. Who has the opportunity to go on the road with a musician?” Lisa Rodrigue, Marketing Manager, Maine Lottery, said.

“We’re so excited to be collaborating with a superstar musician like Lee Brice,” Jeffery Schweig, President, Alchemy3 said. “He is the first of many A-List celebrities we’re working with to offer lotteries’ players once-in-a-lifetime experiences.”

The lotteries promoting access to a country star gave them many ideas on how to market the ticket, from tour bus-shaped point-of-sale stickers to guitar-shaped counter cards. But what the lotteries didn’t expect was how amenable Lee Brice would be to add more value to the license.

“We know Lee Brice records his music. So, we said to Alchemy3, would you ask him to record a line to support the sale of the tickets?” McCann said. “Something like ‘hey country music fans! Join me, Lee Brice, on the road.’”
When Alchemy3 went back to the group, Lee Brice was willing to do more than that. He recorded the entire radio spot for them.

The lotteries then asked for B-Roll for a TV ad, and again, the band delivered, sending videos from his previous concerts. The lottery used the radio recording to create a TV spot. They kept their cost to a minimum since the ad only needed post-production to complete.

“We’re also planning some social media promotions around his music. This would give us the opportunity to interact with our players and give away Lee Brice’s music,” Rodrigue said.

Well, in a give-a-mouse-a-cookie situation, the lotteries came back again to ask for music. Lee Brice was happy to give them the rights to one of his newest songs, Soul, which has been played 14 million times on Spotify in 15 months.

To top it all off, Big Country 107.1, a Vermont radio station that plays country music, heard the Vermont Lottery’s Lee Brice radio spot and was flabbergasted. (Remember, the ticket is called Big Country Cash).

“They didn’t know what it was. ‘Are we giving away money? What’s going on here?’” Whitman said. “And then they realized it was a lottery ticket with an opportunity to tour with Lee Brice on the road and had nothing to do with them.”

The DJs reached out to Whitman to join them live on air. “Their level of excitement around this game… they were ecstatic about it,” Whitman said.

Ecstatic may be an understatement. The top prize for the Vermont ticket is $20,000, and the DJs emphatically said that the secondary prize was better. “Now, here you go, you win the 20 grand, right? And then you buy 20 grand worth of these tickets and hope they’re all bad so you can get in on the real drawing!” One of the DJs said.
The radio station has regularly been airing a recording of Whitman’s interview and has purchased tickets to give away to their fans as prizes.

The Big Country Cash ticket has been a massive win for the Tri-State lotteries. “It was an idea presented by Alchemy3 to the three states, and collaboratively, we made it all the better,” McCann said.

With all the extra assets the band gave to them, the lotteries were eager to give something back. “I think they need chaperones to go with them,” Rodrigue said with a laugh, happy to volunteer.