La Fleur’s Magazine interviewed Pete Donahue, Senior Director, Sales and Marketing at the Connecticut Lottery Corporation (CLC) on what went on behind the scenes in preparing for the lottery’s 50th anniversary. 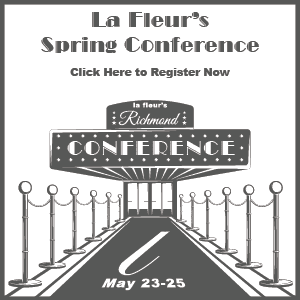 Donahue: “Our 50th Anniversary instant games family was designed completely in-house, from the aesthetic to the prize structures. Plus, it’s the first game we will incorporate into our new 2nd Chance program. We started with our logo, and from there worked with our in-house graphic designers to create a very classy, sleek-looking ticket that will provide our players with multiple opportunities to win.”

La Fleur’s: What was key in designing your 50th anniversary logo?

Donahue: “The Money Tree element of our 50th Anniversary logo is really what makes it special. And originally, we didn’t have it incorporated into some of the first versions of the anniversary logo options. We started out wanting to honor our history and the people who really built the CT Lottery into what it is today, but we couldn’t quite articulate how we wanted that represented, graphically. Our team did a lot of research on different logos and styles, and landed on the classic gold and black color treatment. From there, we had our two, very talented, in-house graphic designers mock up several different versions of a 50th Anniversary logo, giving them latitude to let their creativity flow. They came up with some great examples, but as they worked through different iterations of logos, we thought the versions were missing that throwback feel. The group had a lightbulb moment, and asked the designers to try using the ‘The Money Tree’ – our first logo that is an image of an oak tree with dollar signs as leaves. (The oak tree in Connecticut is historically significant – legend has it, the Charter Oak was a centuries-old large white oak tree in which Connecticut’s Royal Charter of 1662 was hidden from the British.) So, once we knew we wanted to use elements of that first logo, along with some of the newer elements from our current logo and marks, it really started to come together from there. I think the end product is a really elegant, beautiful logo that became the cornerstone for the rest of our 50th Anniversary creative.”

La Fleur’s: What were some of the ideas for the logo and ticket that you rejected? Why?

Donahue: “Our designers came up with some great ideas – some were fun and colorful, and others were classic and simple. As I mentioned before, we felt we needed to pull something from our history into the logo and the tickets, and that became the determining factor.” 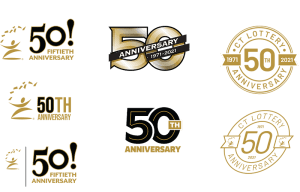 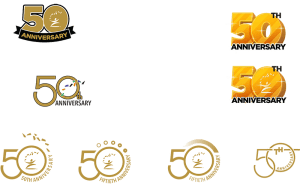 La Fleur’s: Will you launch the 50th Anniversary Fast Play game as a higher price point with bigger payout?

Donahue: “Yes, 50th Anniversary GOLD will be the first Fast Play game to launch in Connecticut at the $20 price point, as a non-progressive jackpot game. It will feature a set top prize of $200,000 (to date, all of our Fast Play games have been families with a progressive jackpot; and the max jackpot to date has not equaled $200,000 – something we believe will resonate immediately with our players.” 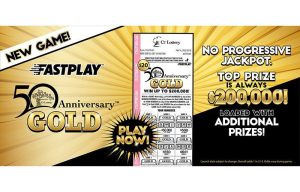 La Fleur’s: Will there be a TV ad to promote the anniversary?

Donahue: “Yes, we will have two campaigns running to support the anniversary – one will be 50th Anniversary-specific with the tagline “It Could Be You.” It highlights all the different types of people who have won with us over the years, and reminding players that the next one could be them. On social media, that campaign will utilize the hashtag #50YearsofWins. That hashtag is intentionally versatile, because it’s not just players who have won over the last five decades, but also the residents in the state of Connecticut, our retailers, and more. The second campaign will be focused on our 2nd Chance program and will be heavily geared toward the 2nd Chance opportunities with the 50th Anniversary instant tickets. That campaign will continue beyond the 50th anniversary.”

La Fleur’s: What is your calendar of events over the next 12 months to celebrate the anniversary?

Donahue: “We will have a variety of events throughout the year for employees, our retailers, and our players, including regular pop-up events with giveaways, telling our original retailer stories over social media (we have 12 who have been with us since the beginning!), and it will all culminate with an exclusive end-of-the-year party. 50 winners and their plus-ones will be invited to join us at a soon-to-be-announced venue where we’ll have food, music, special guests, prizes, and more. The vehicle for the public to gain entry to that party will be through the 2nd Chance program – every non-winning ticket can be entered for opportunities not only to win cash prizes, but also to gain entry to the celebration.”

La Fleur’s: Why are anniversaries so important for a lottery to celebrate with their players?

Donahue: “Our players are integral to our success – not just because they, obviously, are our consumers, but also because we rely on our players to be a continuous feedback pipeline. A particular game didn’t sell as quickly as we thought? Well, let’s see what our players had to say about that through market research. We don’t have enough retailers in a certain part of the state? Our players will call us to let us know. We’re constantly making adjustments based on what we see in sales trends, one-on-one conversations with consumers, and sometimes even from the comments on our social posts. Everything we do, at its root, is for our players to have the most entertaining and satisfying experience at every touchpoint we have with them. So, it’s critical for us to celebrate our players for being as much of a part of the Connecticut Lottery’s success as anything else.”

La Fleur’s: How will you use social channels to promote?

Donahue: “Our social media channels will be used to promote our 50th Anniversary with a combination of tactics, including using video and photo storytelling, promotional contests, livestreams from pop-up events, and more. It’s all about clear and consistent engagement with our players, and making sure we’re always having fun.”

Donahue: “This whole year will be about honoring our past, but also enjoying the present and looking towards a continued successful future. In the last 50 years, the Connecticut Lottery has given back nearly $11 billion to the state of Connecticut. We have added online and retail sports betting, and we will soon be able to offer iLottery. I don’t think anyone could have predicted, even five years ago, that we would be in this position. So, our Marketing efforts this year will be celebrating all of these successes and highlighting everything the Connecticut Lottery has contributed to the state.”